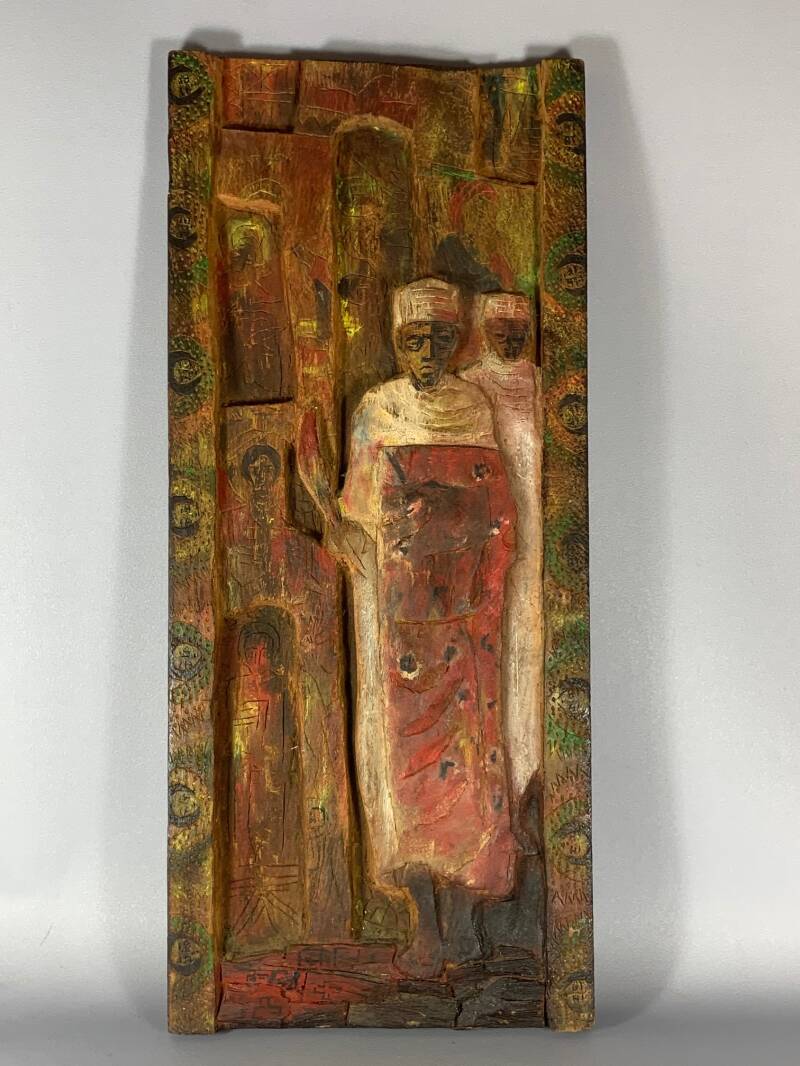 Elias Sime (b.1968 Addis Ababa, Ethiopia) is a multi-disciplinary artist working primarily in relief sculpture and architecture. For more than twenty-five years, the artist has made collage and sculptural assemblage from found objects such as thread, buttons, plastic, animal skins, horn, fabric and bottle tops, alongside organic building materials and binding agents such as mud and straw. Many of the objects come from Mercato, the Addis Ababa open-air market said to be the largest in Africa, and in particular the market’s Menalesh Tera section—literally “what do you have?”—where trash is repurposed in resourceful ways and its new potential is shared among the community.

Sime’s work achieves effects from dense narrative to austere modernist abstraction. The artist resists the collagist’s shorthand of using discarded objects as traces or poetic stand-ins for human feelings or individual lives, favoring instead the idea of what Frieze writer Quinn Latimer has called “the feverish fusion of a multivalent society.” Sime is as interested in a stripped motherboard from a mobile phone as he is an animal skull or worn-out button: the artist looks past the emotional weighting of new versus old, instead finding renewal everywhere, and taking greatest interest in the way that objects and ideas can connect in new ways.

Sime has a masterful handling of material, with fluency and pure formal instincts a hallmark of his practice. In the past decade he has sought to better understand the cultural and historic underpinnings of those instincts, traveling with the anthropologist Meskerem Assegued through rural villages in Ethiopia to research ancient rituals still in practice. Sime collects histories and vernacular techniques as much as objects.

Holland Cotter of The New York Times writes, “Sime’s work, while culturally specific, has always been universalist. And although never without critical thrust — no one knows better the horrors visited on Africa by shipments of toxic Western e-waste — it is utopian.”

As an extension of his art-making, Sime is involved in the exploration of vernacular architecture. Working with his longtime collaborator, Assegued, Sime co-founded, designed, and built the award-winning Zoma Museum in Addis Ababa, an environmentally conscious international art center described by The New York Times in 2009 as “a voluptuous dream, a swirl of ancient technique and ecstatic imagination.” Zoma Museum celebrated its grand opening in its new location in March 2019, with expanded facilities that include a gallery space, library, children’s center, edible garden, elementary school, art and vernacular school, amphitheater, cafe and museum shop.

Sime has exhibited extensively around the world. His work has been shown internationally at the Dak’Art Biennale of Contemporary African Art in Dakar, Senegal; the New Crowned Hope Festival in Vienna, Austria; and in the United States at the Metropolitan Museum of Art, New York; the Studio Museum in Harlem; and a survey exhibition that traveled from the Santa Monica Museum of Art, California, to the North Dakota Museum of Art. The Wellin Museum of Art at Hamilton College presented Elias Sime: Tightrope in the fall of 2019, marking the artist’s first major museum survey. Curated by Tracy L. Adler, the Wellin Museum’s Johnson-Pote Director, the exhibition highlights Sime’s work from the last decade, much of which comprises the series entitled “Tightrope,” alongside a selection of early works critical to the artist’s development. On view from September 7 through December 8,2019 at the Wellin Museum of Art, the exhibition will subsequently travel to the Akron Art Museum in Akron, Ohio (February 29 – May 24, 2020), the Kemper Museum of Contemporary Art in Kansas City, Missouri (June 11 -September 13, 2020), and the Royal Ontario Museum in Toronto, Canada (December 12, 2020 – April 18, 2021). Elias Sime: Tightrope is accompanied by the first monograph focusing on the work of Elias Sime, co-published by the Wellin Museum of Art and DelMonico Books • Prestel. Sime will be the subject of a solo exhibition at the Saint Louis Art Museum in July 2020.

In 2019, Sime received an African Art Award from the Smithsonian National Museum of African Art and was shortlisted for the Hugo Boss Prize 2020.