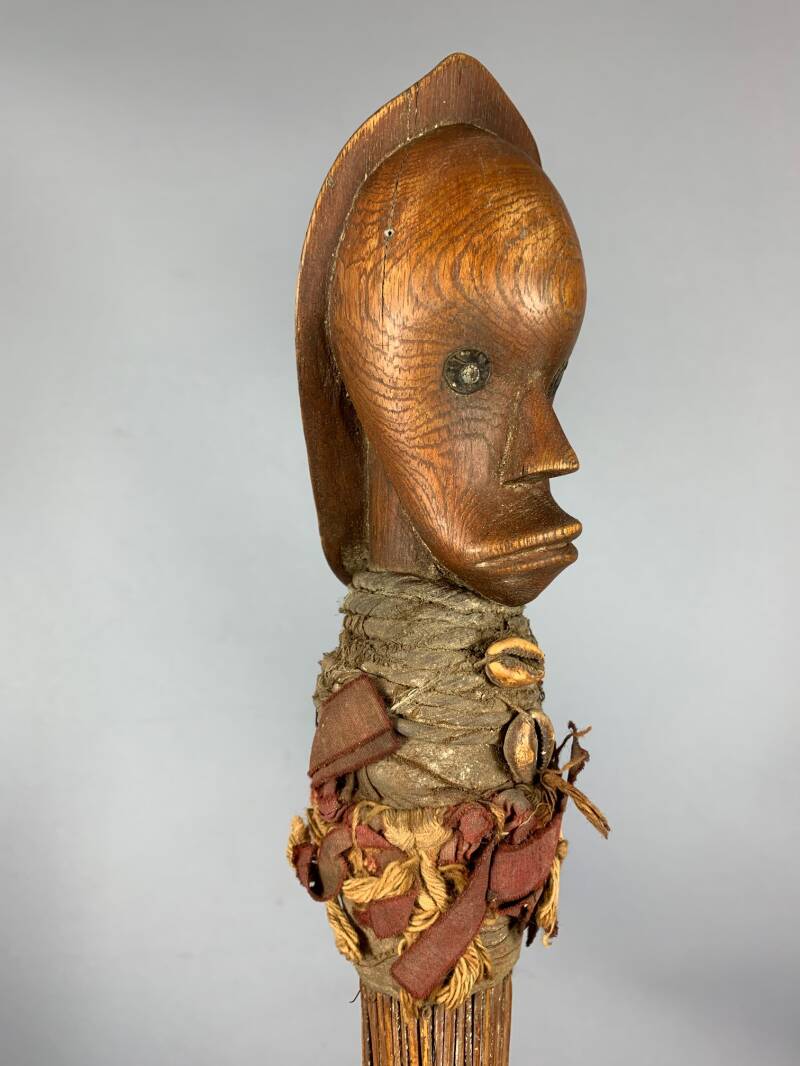 The head acts as a handle for the broom, which is made of reed.

The fang way is recognized by the accentuated muscular reliefs of the arms and calves, as well as the curved shoulders and thighs whose curves extend into the callipyge mass of the gluteus (the fixation rostrum on the nsekh-byeri reliquary has disappeared ). The torso is rounded into a volume that flares out in “barrel” with a prominent navel (marked with a brass nail). Gender male pointing between the thighs. The care taken to finish the back with a longitudinal flat in the prolongation of the crest of the cap is noticeable.
The head, large mass in relation to the body and a refined sculptural finish, Is a good illustration of the “classical” style of the Southern Fang with a concave-convex face with a broad, rounded forehead with perfect rounding and a “heart” -shaped face with broad, slightly hollow sockets with curved incisions , A flattened and short nose, a very pronounced philtrum. The maxillary zone, very stretched forward, without a figured mouth or chin, presents a beautiful rounding in the prolongation of the curves of the face.

The scars on the forehead and the cheeks of the personage is identified as “tears of a girl”.
The eyes, carved in light relief, are decorated with nails of brass with a hemispherical head. On both sides of the face, the small ears are rounded (the one on the left is decorated with a metallic buckle) and almost integrated in the mass of the headdress. The latter, with a broad central crest, falls back into the catch on the nape of the neck. It is a depiction of the nlo-o-ngo hairpiece, a kind of rattan and fiber helmet decorated with cowries and brass nails that the Fang wore until the 1920s. The patina of the statue is of Reddish brown tone with some resinous areas on the neck and head.

The people that are called “Fang” in the geographic or ethnographic literature number 800,000 and constitute a vast mosaic of village communities, established in a large zone of Atlantic equatorial Africa comprising Cameroon, continental equatorial Guinea and nearly the whole north of Gabon, on the right bank of the Ogowe River. Historically the Fang were itinerant, and it is relatively recently that they have settled into this broad area. Fang are principally hunters but also agriculturists. Their social structure is based on a clan, a group of individuals with a common ancestor, and on the family.