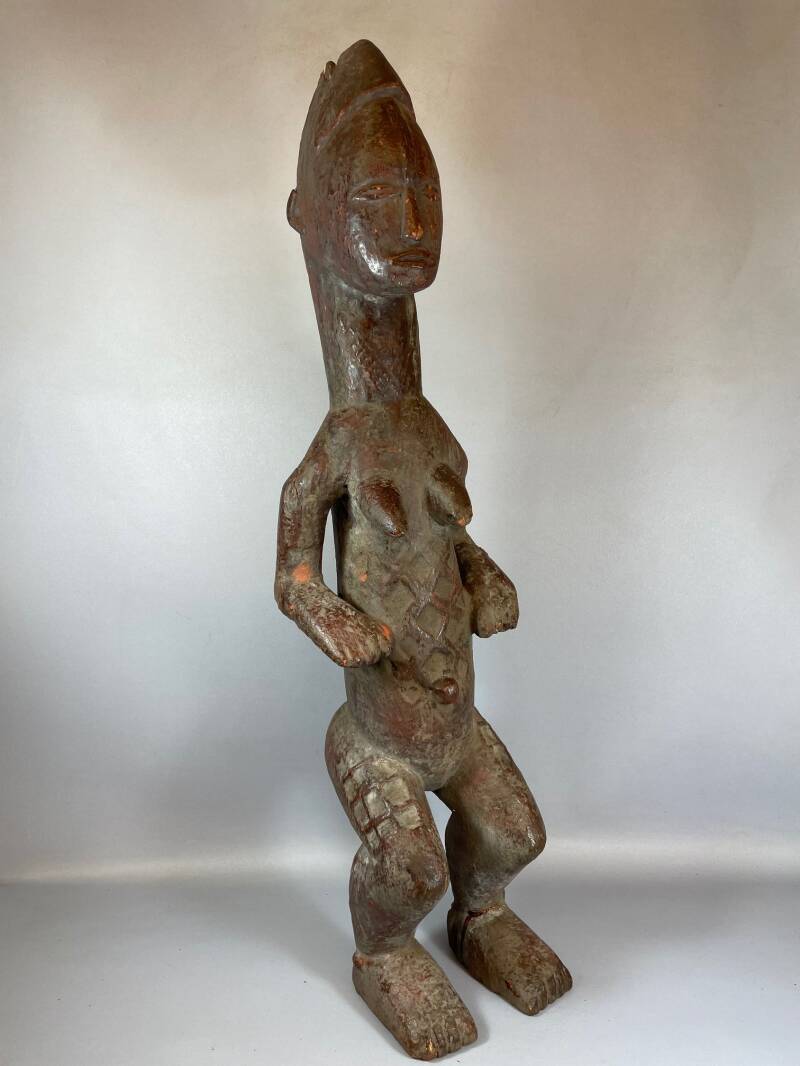 Hand carved from a single piece. This statue comes from my own private collection and is made before the '50th

Height: 83 cm, see for condition the photo's and the left feet is tribal repaired.

Living mainly in the forested areas of south-west Nigeria, on both sides of the Niger River the Igbo number some ten million individuals. Mainly farmers and merchants, they also hunt and fish. They are subdivided into thirty-three subgroups and are spread out among about two hundred villages scattered through the thick forest or semifertile marshland. Only on the northern and western edges of the area, under influence from Igala and Benin, are hereditary rulers found. The heads of families form the council of elders, which shares its power with numerous secret societies. These societies exercise great political and social influence. They are highly hierarchical, their members passing from one level to the next. There is strong social pressure toward individual distinction, and men can move upward through successive grades by demonstrating their achievements and their generosity.

Ikenga (Igbo literal meaning "strength of movement") is a horned Alusi found among the Igbo people in southeastern Nigeria. It is one of the most powerful symbols of the Igbo people and the most common cultural artifact. Ikenga is mostly maintained, kept or owned by men and occasionally by women of high reputation and integrity in the society. It comprises someone's Chi (personal god), his Ndichie (ancestors), aka Ikenga (right hand), ike (power) as well as spiritual activation through prayer and sacrifice.

Ikenga is exclusively an Igbo symbol. Nevertheless, various peoples of Southern Nigeria have slightly different notions of the components of an individual personality, but all agree that these various aspects can only be affected through ritual and personal effort. Some variants of it are found in Ijaw, Ishan, Isoko, Urhobo and Edo areas. Among the Isoko people, there are three types of personal shrine images: Oma, which represents the "spirit double" that resides in the other world; Obo which symbolizes the right hand and personal endeavor and the lvri which stands for personal determination. In the Urhobo areas it is also regarded as Ivri and in the Edo areas it's called Ikegobo.