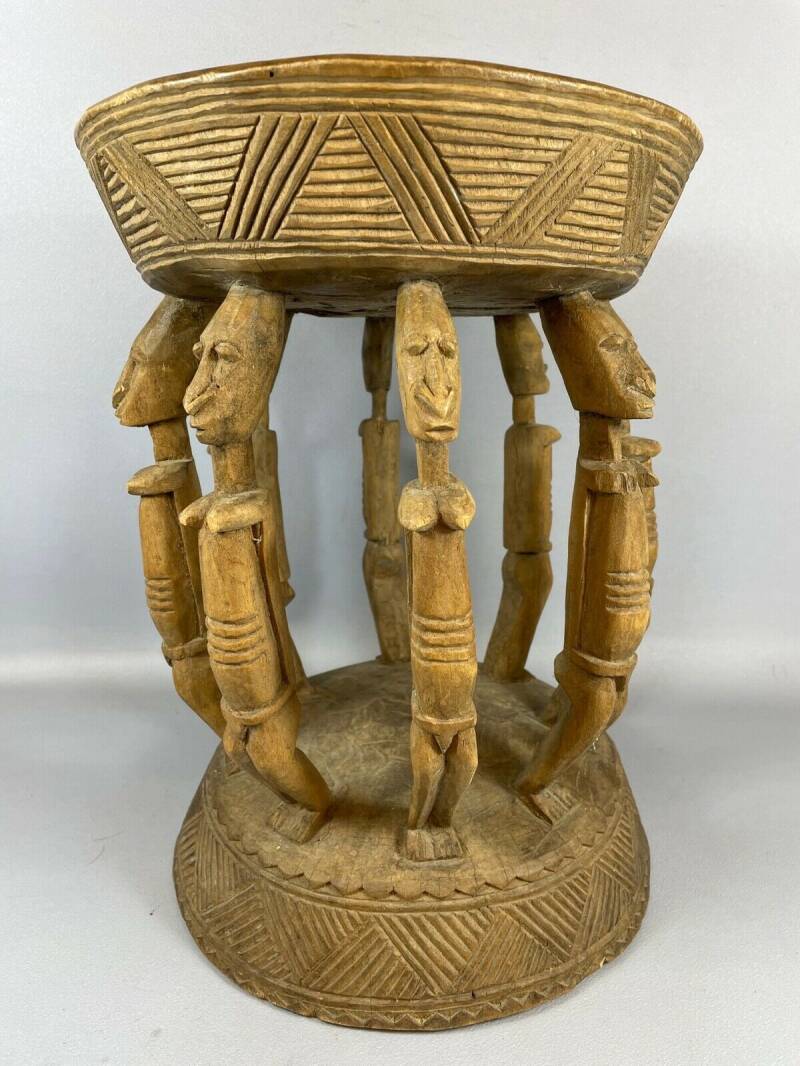 Dogon art is extremely versatile, although common stylistic characteristics – such as a tendency towards stylization – are apparent on the statues. Their art deals with the myths whose complex ensemble regulates the life of the individual. The sculptures are preserved in innumerable sites of worship, personal or family altars, altars for rain, altars to protect hunters, in market. As a general characterization of Dogon statues, one could say that they render the human body in a simplified way, reducing it to its essentials. Some are extremely elongated with emphasis on geometric forms. The subjective impression is one of immobility with a mysterious sense of a solemn gravity and serene majesty, although conveying at the same time a latent movement. Dogon sculpture recreates the hermaphroditic silhouettes of the Tellem, featuring raised arms and a thick patina made of blood and millet beer. The four Nommo couples, the mythical ancestors born of the god Amma, ornament stools, pillars or men’s meeting houses, door locks, and granary doors. The primordial couple is represented sitting on a stool, the base of which depicts the earth while the upper surface represents the sky; the two are interconnected by the Nommo. The seated female figures, their hands on their abdomen, are linked to the fertility cult, incarnating the first ancestor who died in childbirth, and are the object of offerings of food and sacrifices by women who are expecting a child. Kneeling statues of protective spirits are placed at the head of the dead to absorb their spiritual strength and to be their intermediaries with the world of the dead, into which they accompany the deceased before once again being placed on the shrines of the ancestors. Horsemen are remainders of the fact that, according to myth, the horse was the first animal present on earth. The Dogon style has evolved into a kind of cubism: ovoid head, squared shoulders, tapered extremities, pointed breasts, forearms, and thighs on a parallel plane, hairdos stylized by three or four incised lines. Dogon sculptures serve as a physical medium in initiations and as an explanation of the world. They serve to transmit an understanding to the initiated, who will decipher the statue according to the level of their knowledge.