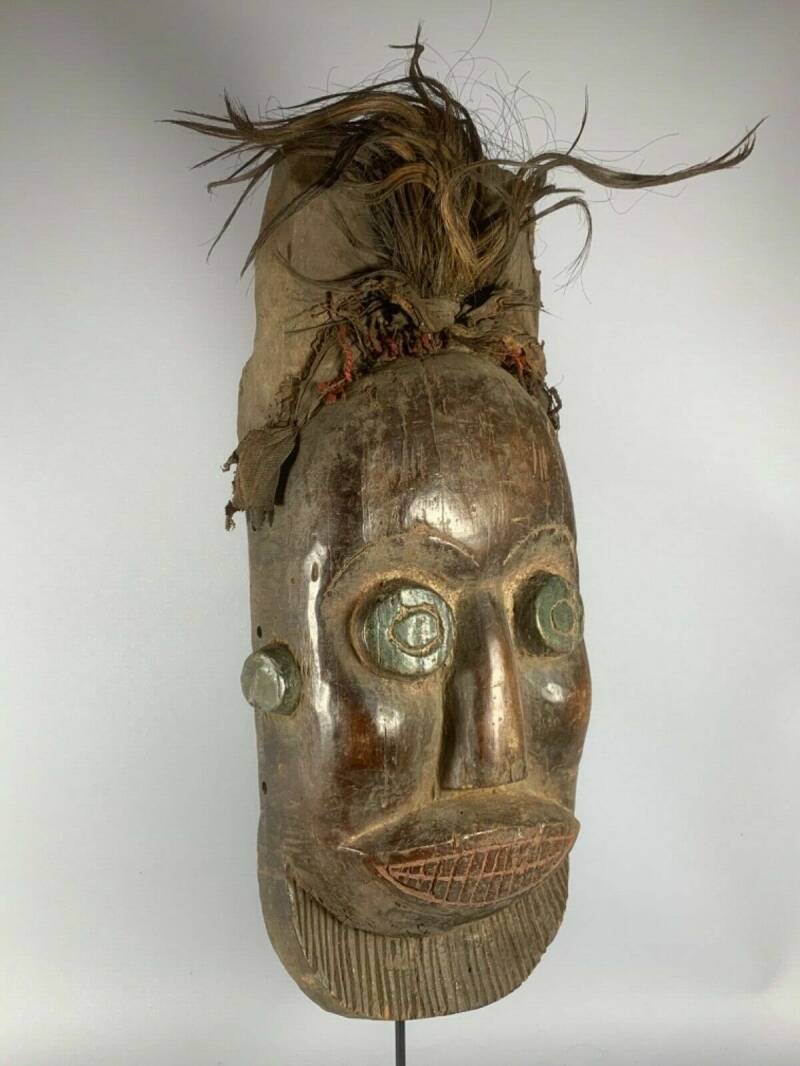 Hand carved from a single piece of wood, with color pigments

The Dan are a Mande ethnic group from northwestern Ivory Coast and neighboring Liberia. There are approximately 700,000 members of the group and their largest settlement is Man, Ivory Coast. Neighboring peoples include the Krahn, Kpelle and Mano. They are officially known as Yacouba (or Yakouba) in Ivory Coast. In Liberia, they are also known as Gio (Bassa for "slave"), which is considered a derogatory exonym.

They speak the Dan language, a Southeast Mande language. The Dan are known for their art, especially their mask rituals (Ge or Gle), as well as their secret society, Gor. Gor (Dan for "leopard") is a peacemaking society, not to be confused with the brutal Ekpe (leopard) society of Nigeria.

The Dan originally came from the western Sudan region to the north, part of present-day Mali and Guinea. The location and movements of the Dan, Mano and We can be reconstructed from as early as the 8th century , at which time the Dan and Mano were located in the savanna region of the northern Ivory Coast. In the tenth century, political turmoil, population growth and land depletion caused the Dan to migrate south of the Nimba range and into the high forests.

The Dan had a reputation as a fierce warrior society. One notable warrior chief was Grougbay Zobaneeay, who fought and pushed the tribes that once live in the present day Nimba County to as far as Loguatuo in Ivory Coast. Kipko Toh'ah-Gbeu drove the Kru men from what is now called Tapitah, Nimba County (prior to the arrival of Chief Tapeh); his last major war with the settlers was in Sanniquellie. He retired when he was wounded in the Sanniquellie war. Kipho gave his daughter Lhe'kpahseu in marriage to Grougbay Zobaneeay. Bho'Yaah, who lived in today's Garplay, Nimba County- in an alliance with Kipho Toh'Gbeu, made a truce to quit fighting the settlers. He was actually one of the last chief warriors of the Dan to have resisted the Americo-Liberian military push into Nimba. Gonsahn Ghe'Gbeu was from Miampleu Yeezleu, Nimba County. He also drove the Kphelehs from Eastern Liberia.

The basic unit of Dan culture is the family. Dan culture is patrilineal and polygamous, so this unit comprises a husband, one or more wives and their children. Lineages, or groups of people descended from a common ancestor in the paternal line, live in distinct sections of the town, which are called quarters in Liberian English. Towns group together under a central government are called clans.

Dan arts are notable for wood sculpture, including a huge variety of masks, each with unique forms and purposes. Dan masks are the most important art form of the Dan people. Artisan also produce traditional wooden spoons.