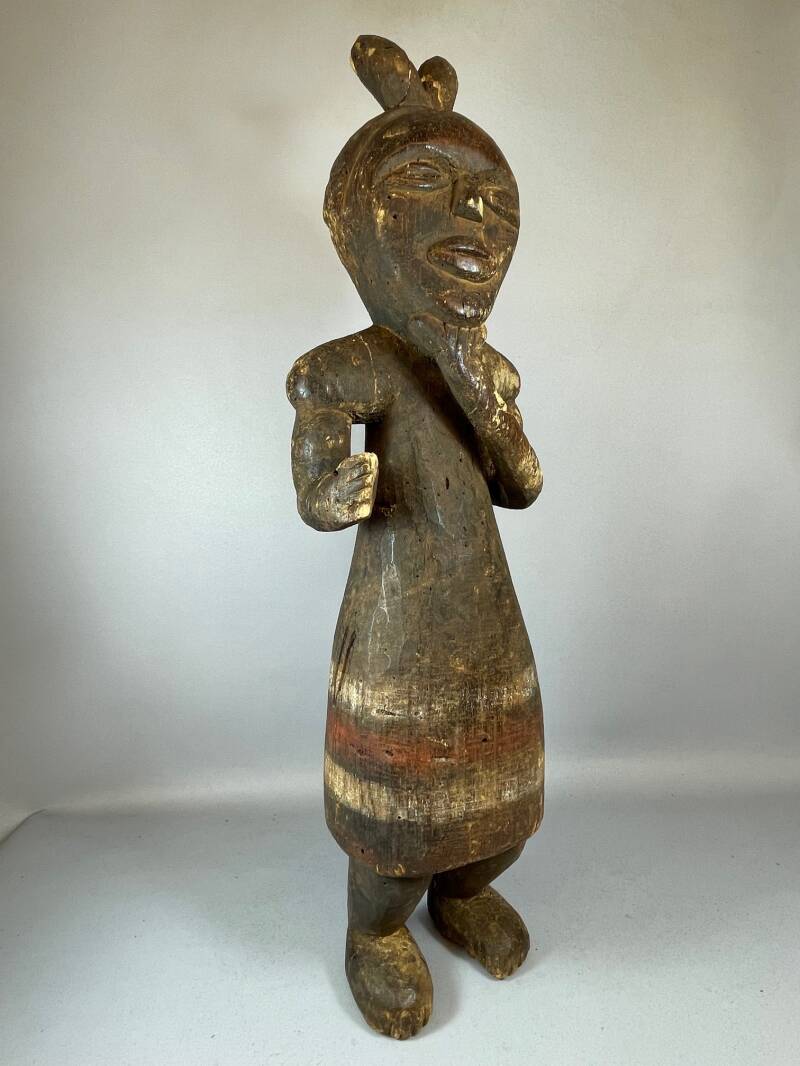 Hand carved from a single piece of wood, with light color decoration on the middle. For condition see the pictures, several places are broken and repaired.

The Baule or Baoulé /ˈbaʊˌleɪ/ (Baule: Baule [ba.u.le]; French: baoulé [bawle]) are an Akan people and one of the largest ethnicities in Côte d'Ivo. who historically migrated from what is today Ghana. The Baoulé are traditionally farmers who live in the centre of Côte d'Iv. (Iv. Coast), in a triangle shaped region (the Baoule “V”) between the rivers Bandama and N'Zi. This area broadly encompasses the regions around the cities of Bouaké and Yamoussoukro. The Baoulé have come to play a relatively important role in the recent history of Côte d'Iv.: the State's first President, Félix Houphouët-Boigny, was a Baoulé; additionally, the Baoulé have also become one of the most widespread ethnicity throughout the country, especially in the Southern forests (the «Low Coast») where they are amongst the most numerous planters of cocoa, rubber, and coffee and sometimes seem to outnumber the local native ethnic groups.

The Baoulé people are talented in African art. Their sculptures are renowned for their refinement, form diversity and the labor they represent. The sculptures do not only include face masks and human figurines, but also include a great variety of work in gold, bronze.

Many Baoulé art objects are restricted to be seen only by the individual for whom it was made or by a specific group of people. They are often considered to be powerful spiritual objects. The most powerful spiritual objects are the men's sacred masks, bo nun amuin. This mask is a boxy helmet mask representing a menacing animal with bared teeth. Viewing the mask is restricted to men. If a woman or child sees the mask they risk serious injury or death. It is danced in times of trouble to protect the village and at important men's funerals. When the bo nun amuin mask is danced it can become very wild and violent. The spirit may chase the men through the village or wreak havoc by destroying things in its path.