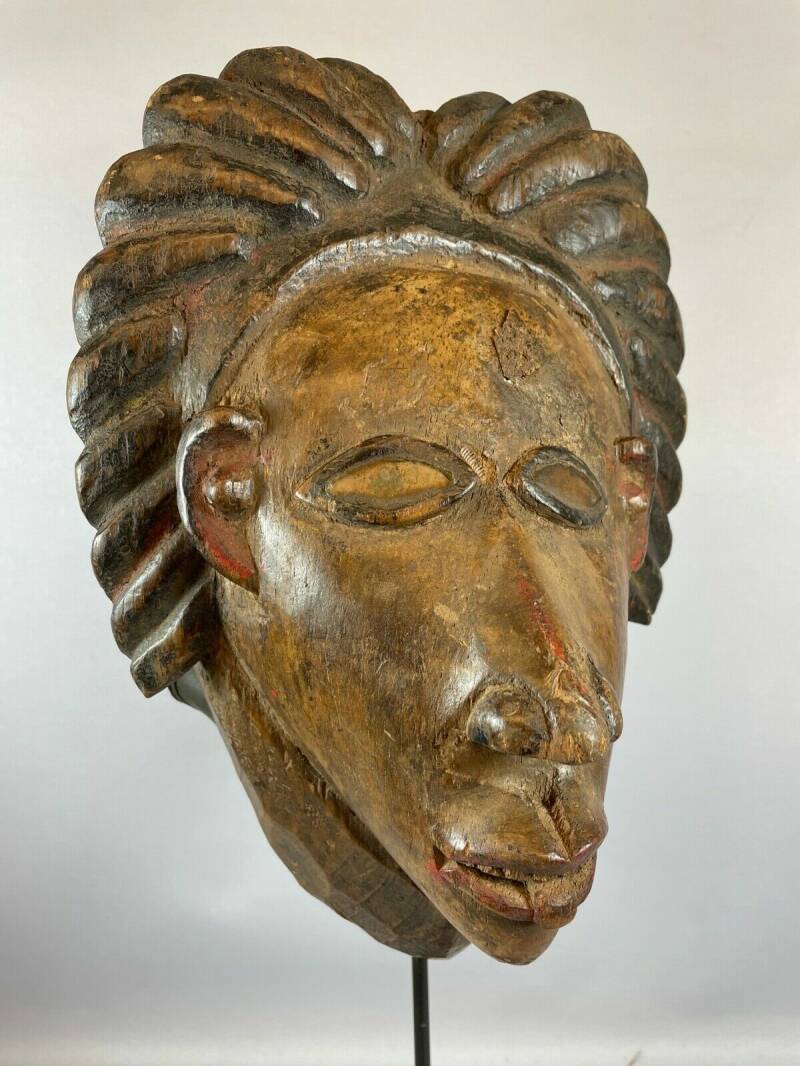 Hand carved from a single piece of wood, with color pigments, glass eyes and with original rubber strap

This Bakongo mask was collected between 1930 and 1950 and ended up in my private collection in 1992.

The Bakongo people (or Kongo people) have traditionally recognized their descent from their mother, and this lineage links them into kinship groups.The Kongo people (Kongo: Bisi Kongo, EsiKongo, singular: MwisiKongo; also Bakongo, singular: Mukongo) are a Bantu ethnic group primarily defined as the speakers of Kikongo (Kongo languages).

The large Bakongo society features a diversity of occupations. Some are farmers who grow staples and cash crops. Among the staples are cassava, bananas, maize, taro and sweet potatoes. Other crops include peanuts (groundnuts) and beans. The cash crops were introduced by the colonial rulers, and these include coffee and cacao for the chocolate industry. Palm oil is another export commodity, while the traditional urena is a famine food. Some Kongo people fish and hunt, but most work in factories and trade in towns.

The Kongo people have traditionally recognized their descent from their mother (matrilineality), and this lineage links them into kinship groups. They are culturally organized as ones who cherish their independence, so much so that neighboring Kongo people's villages avoid being dependent on each other. There is a strong undercurrent of messianic tradition among the Bakongo, which has led to several politico-religious movements in the 20th century. This may be linked to the premises of dualistic cosmology in Bakongo tradition, where two worlds exist, one visible and lived, another invisible and full of powerful spirits. The belief that there is an interaction and reciprocal exchange between these, to Bakongo, means the world of spirits can possess the world of flesh.2