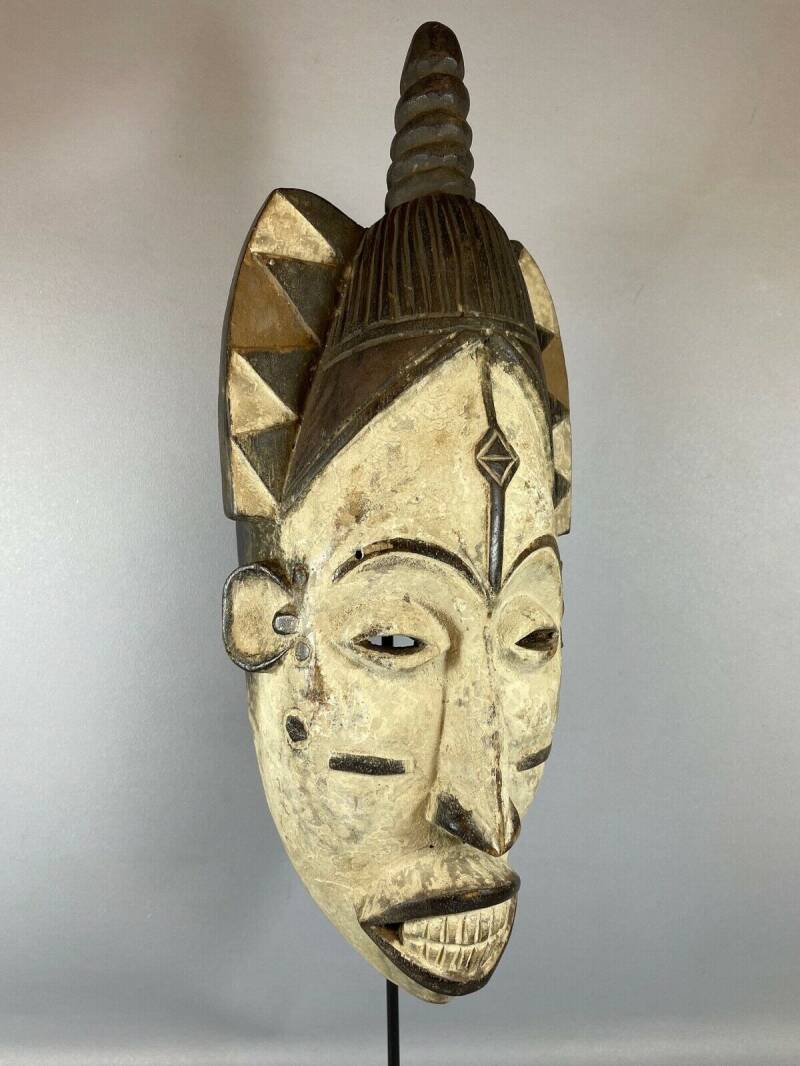 'The culture of the Duala, a coastal people, is dominated by the proximity of the sea, which distinguishes them in many respects from the inland peoples. The main characteristic of the art of their masks is the horned animal (buffalos and marsh antelopes) depicted in polychromed wood.
Although these nyatti masks were worn horizontally on the head, like the groups inland, they have their own specific characteristics: a flat outline instead of rounded forms, extremely stylised features evoking animals in a geometric style, and instead of the habitual black they are polychromed black, white and red.
This specimen of a mask tradition abandoned a long time ago was executed with extreme care. The artist had a distinctive sense of compositional contrast: the trapezoid face, whose elongation is emphasised by the median line, contrasts with the roundness of the powerful horns. The artist, a master of his art, was probably working for the society called ekong (ekongolo). Secret, elitist and still active today, it is composed above all of respected and wealthy men belonging to the ruling class, and one of its tasks is to seek out and punish magicians causing harm or threatening the community and its well-being.
Eyewitness accounts by Buchner and Zintgraff (Buchner 1884; Zintgraff 1887, cited in Krieger et al. 1960) state that this bovid mask was used above all during rituals - for example the burial of a member of the community - to scare off people who were not initiates. The bovid masks of Oku, in the Grassland region of Cameroon have the same aggressive role, which is emphasized in Duala masks by the pointed steel tongue.'
While there is little specific information regarding Dr. Esch and African art, he is mentioned for his work as a geologist, and was in Cameroon in 1906 according to records found in the 'Mitteilungen von Forschungsreisenden und Gelehrten aus den deutschen Schutzgebieten', 1911: "Das Manenguba-Gebirge, 1:100.000; nach den Aufnahmen von Stabsarzt Berk, Dr. Esch, Hauptmann Glauning, Prof. Dr. Hassert, Oberleutnant Hirtler, Oberrichter Dr. Meyer, Oberleutn. Rausch, Oberleutnant Schlosser und dem gesamten vorhandenen Material bearbeitet von E. Lober unter Leitung von M. Moisel" (MITT-SCH 1911, Karte 9); and 1906 Zeitschrift fuer Geologie. He co-authored the book: Beiträge zur Geologie von Kamerun, Stuttgart, 1904.