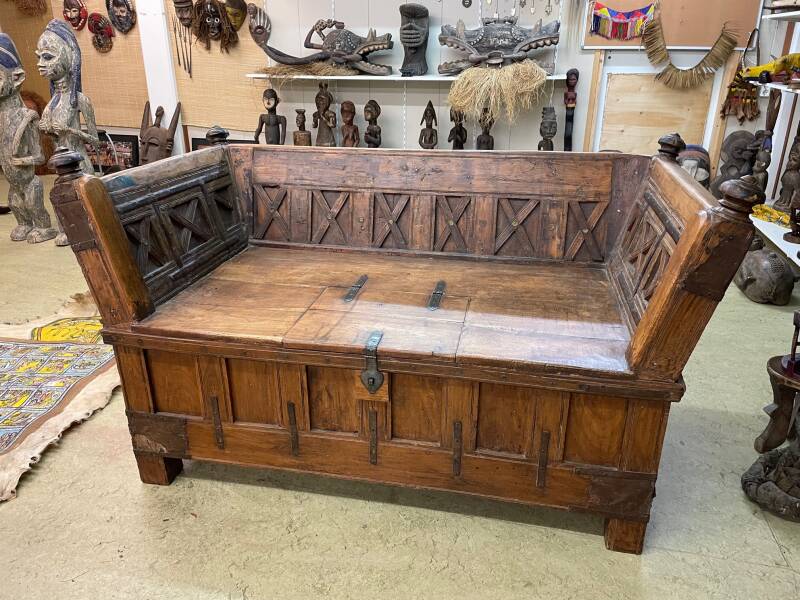 This sofa was brought from Erthiopia during the relocation of the Amsterdam Trade Association (HVA) and the Koninklijke Machinefabriek Gebr. Stork in 1978. This bench comes from a demolished church or monastery that was demolished during the construction of the sugar factories in the 1950s. It moved from Wonji in Ethiopia to Hengelo in the Netherlands.

This bank are very heavy, more then 125 kilo.

The factory is found at Oromiya region near Adama City at 110 Kilo Meters from Addis Ababa. Wonji Sugar Factory is the oldest and the pioneer in the history of Ethiopia’s sugar industry. Commencing production in 1954.

Then, followed Shoa Sugar Factory in 1962; is the second oldest and both, being obsolete, have stopped production since July, 2012 and July, 2013 respectively. The two factories constructed by the Holland Company known as H.V.A had a capacity of producing 75 thousand tons of sugar a year. The sugarcane plantation land of these two factories was 7,000 hectares out of which 1,000 had been planted by out growers.

In a bid to replace these two oldest factories with a new and modern one, an expansion project had been carried out both in the cane cultivation field and the factory since 2005/2006. And, the factory plant expansion project has come into its completion in July, 2013. Accordingly, the newly built and modern Wonji Shoa Sugar Factory has currently a design capacity of crushing 6,250 tons of cane a day and producing 174,946 tons of sugar per annum which with further expansion work will reach up to 12,500 TCD maximizing its production to 220,700 tons of sugar a year.

The new plant, when having an ethanol plant, will initially have a capacity of producing 10,000 meter cube ethanol per annum that with further expansion will reach 12,800 meter cube. The Factory is currently contributing 20 megawatt electric powers to the national grid in addition to satisfying its own demand which is around 11 megawatt. Its agricultural expansion project is currently being carried out around the areas known as Wakie Tiyo, Welenchiti and North Dodota areas. The factory, with the help of this agricultural expansion project, will have 16,000 hectares of sugarcane plantation field in total.

From the 12,800 hectares of land developed with sugarcane 7 thousand hectares are developed by 31 sugarcane outgrowing associations who have 9,319 members. The members have benefited from the higher income they generate from this. Some association members from these share 50,000 to 240,000 birr each as a dividend.

The factory has created favorable conditions in giving irrigated land for the out growers, delivering special seed and giving vocational and technical support so as to benefit them from growing sugarcane and selling it to the factory.

Shipping only in the Netherlands, Belgium and west Germany.3