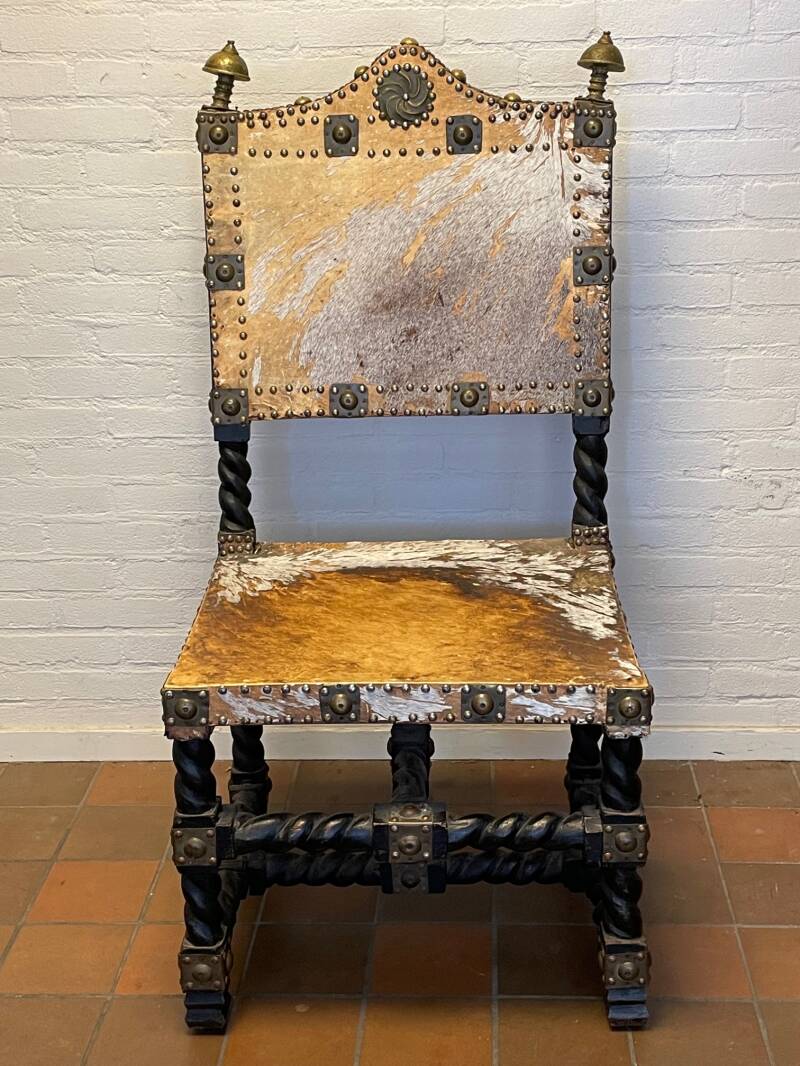 The backrest and seat are made of animal skin

Ashanti (/əˈʃɑːntiː/ (audio speaker iconlisten)), also known as Asante, are part of the Akan ethnic group and are native to the Ashanti Region of modern-day Ghana. Twi is spoken by over nine million Ashanti people as a first or second language.

The wealthy, gold-rich Ashanti people developed the large and influential Ashanti Empire, along the Lake Volta and Gulf of Guinea. The empire was founded in 1670, and the Ashanti capital Kumasi was founded in 1680 by Asantehene (emperor) Osei Kofi Tutu I on the advice of Ɔkͻmfoͻ Anͻkye, his premier. Sited at the crossroads of the Trans-Saharan trade, the Kumasi megacity's strategic location contributed significantly to its growing wealth. Over the duration of the Kumasi metropolis' existence, a number of peculiar factors have combined to transform the Kumasi metropolis into a financial centre and political capital. The main causal factors included the unquestioning loyalty to the Asante rulers and the Kumasi metropolis' growing wealth, derived in part from the capital's lucrative domestic-trade in items such as gold, slaves, and bullion.

In the 1670s the Ashantee went from being a tributary state to the centralized hierarchical Denkyira kingdom. Asantehene Osei Kofi Tutu I, military leader and head of the Oyoko clan, founded the Ashanti kingdom. Osei Tutu obtained the support of other clan chiefs and using Kumasi as the central base, subdued surrounding states. Osei Tutu challenged and eventually defeated Denkyira in 1701, and presumptuously from this, the name Ashanti came to be.

Realizing the weakness of a loose confederation of Akan states, Osei Tutu strengthened centralization of the surrounding Akan groups and expanded the powers judiciary system within the centralized government. Thus, this loose confederation of small city-states grew into a kingdom or empire looking to expand its land. Newly conquered areas had the option of joining the empire or becoming tributary states. Opoku Ware I, Osei Tutu's successor, extended the borders.