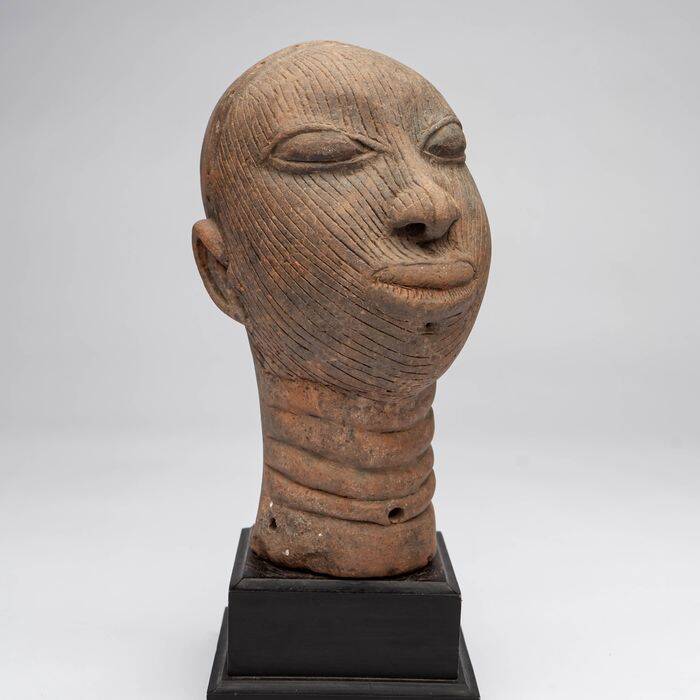 size; 23×16×12 cm and weight 1.7 kilos.
Ife, the former capital of Nigeria, gave its name to this art of terracotta sculpture. This terracotta head is in the style of Ita Yemoo, a site discovered in 1957. It undoubtedly represents a dignitary. The prosperity of Ife allowed the development of an unparalleled art that would have been born in the terracotta and later transformed into the metal.

Ife is an ancient Yoruba city in southwestern NIGERIA. The city is known as the cradle of this people and of one of the most beautiful civilizations in sub-Saharan Africa. The Yorubas or Yoroubas are a large ethnic group in Africa, mainly present in Nigeria, on the right bank of the Niger River, but also in Benin, Ghana, Togo, Burkina Faso and Ivory Coast.

The concept of ase influences how many of the Yoruba arts are composed. In the visual arts, a design may be segmented or seriate- a "discontinuous aggregate in which the units of the whole are discrete and share equal value with the other units."[5] Such elements can be seen in Ifa trays and bowls, veranda posts, carved doors, and ancestral masks.1