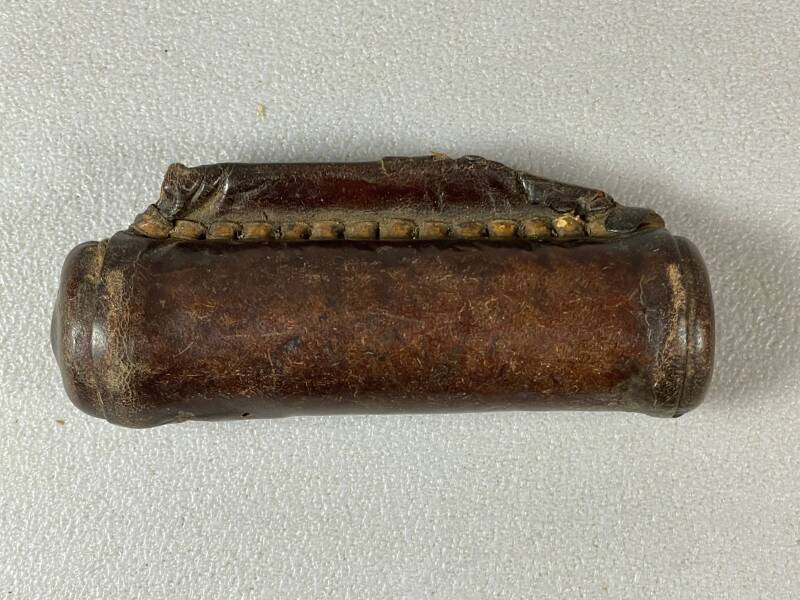 Antique 18th century Ethiopian scroll or amulet with scroll inside.

Each scroll was worn for a man's lifetime. It was written for one particular person. The text was in Ethiopic (Ge'ez), a Semitic language that is no longer spoken, but is still used for liturgical and other religious purposes by the Ethiopian Orthodox Church. The scrolls inside are most often vellum, usually calfskin, prepared by a lengthy exposure in lime, scraped with a rounded knife and finally rubbed smooth with pumice stone. The vellum is often scored with a pin, and they are written in black ink with titles and holy names often being in red.The subjects of these "Bibles" are always Christian, but actual content varies. It is difficult to date these pieces, which were made as early as the fourteenth century and continued through about 1850.

Ethiopian healing scrolls eliminate illness by purging evil spirits and demons from a sick person. Part of a larger healing ritual, the scrolls were commissioned by the illiterate to combat grave illnesses. While plant and animal medicines alleviate physical symptoms, the medicinal scrolls alleviate spiritual symptoms. A pan-religious phenomenon practiced among Jews, Christians, and Muslims in the northern regions of Amhara and Tigray, the scrolls restore health by utilizing written words and talismanic images imbued with magical protective powers.

Ethiopian medicine and talismanic art drew from Christian and Muslim traditions, including Arabic-language protective scrolls, examples of which can be found in the collection of the Metropolitan Museum. Healing scrolls likely originated during the Aksumite empire (ca. 1st–8th centuries), with several million in use by the nineteenth century. Despite their prevalence, the scrolls have drawn the ire of both political and religious leaders. In the fifteenth century, the emperor Zar’a Ya‘eqob condemned the use of magical objects and diviners, harshly punishing those who relied upon them. While the Ethiopian Orthodox Church does not condone magical objects, scrolls are tolerated because they incorporate Christian texts. Healing scrolls served the same purpose that domestic icons fulfilled in other forms of Orthodox Christianity. The use of scrolls and other traditional Ethiopian medicines has declined since the 1970s.

Healing scrolls are made by Däbtäras, unordained clerics of the Ethiopian church who also practice traditional medicine. To be most effective, each scroll is customized according to astrologically derived guidelines. The preparation of parchment begins a ritual in which the animal substitutes for the afflicted, and the finished scroll substitutes for their skin. This symbolic relationship engenders a close connection between the scroll and its owner. The patron is first rubbed with a live animal, and later bathed in its blood and stomach contents. Only then is the skin soaked, dried, and scraped, after which the finished parchment is cut and sewn into a scroll. Portable scrolls made to the length of the customer offer head-to-toe spiritual protection, while longer scrolls protect a household. In Tigrinya-speaking areas, a person-sized scroll is called ma’ero qumät (“full size”), or more generally, tälsäm (talisman). In Amharic-speaking regions, the scroll is called yä branna ketab (“written on skin”). In some cases, the astrological formulas are less closely adhered to. D&aumlbt&aumlras may rely on a repertoire of familiar prayers and talismanic images, or repurpose existing scrolls by inserting a new client’s name.

Healing scrolls are written in Ge’ez, a 2,000-year-old indigenous Semitic language. Once the lingua franca of the Aksumite empire, Ge’ez is now the liturgical language of the Ethiopian Orthodox Church. Ethiopian magical literature—which includes healing scrolls—relies upon the invocation of the secret names of god (asmat). By mastering these many names, a däbtära or other priest can oblige God to aid his client. The scrolls’ prayers are composed of passages from Christian books that invoke these or other protective and curative words. Frequently used prayers protect against the evil eye (aynät), or capture demons. One such prayer—the Net of Solomon—recalls how King Solomon was said to have forced the king of the Demon-blacksmiths to reveal his evil spells. It is frequently accompanied by a talismanic design of an eight-pointed star, used to trap demons within its interlocking lines. Still other prayers act against malevolent spells. As in all Ge’ez manuscripts, prayers are written with carbon black ink, while the names of the holy Trinity and headings are written with red ink. The client’s name is added in red only after the scroll’s completion. The inks are sometimes enhanced with ritually powerful plants or sacrificial blood to increase their effectiveness. Only these two colors are necessary for a scroll to be effective.

Images on scrolls are nonrepresentational talismanic designs that reveal mysteries and enhance the effectiveness of written prayers. Despite drawing inspiration from illuminated manuscripts and wall paintings, the designs are wholly functional. Opaque color fields and curving double outlines guide viewing and reinforce the talisman’s ocular power during the healing process. There is no fixed interpretation for the imagery on healing scrolls. Instead, the meanings of saintly, demonic, and angelic images vary according to region, or according to the däbtära interpreting the designs. Angels are among the most frequently incorporated figures in talismanic images. They may pose frontally as guardian archangels with drawn swords, or they may appear as a face encircled by eight stylized wings.