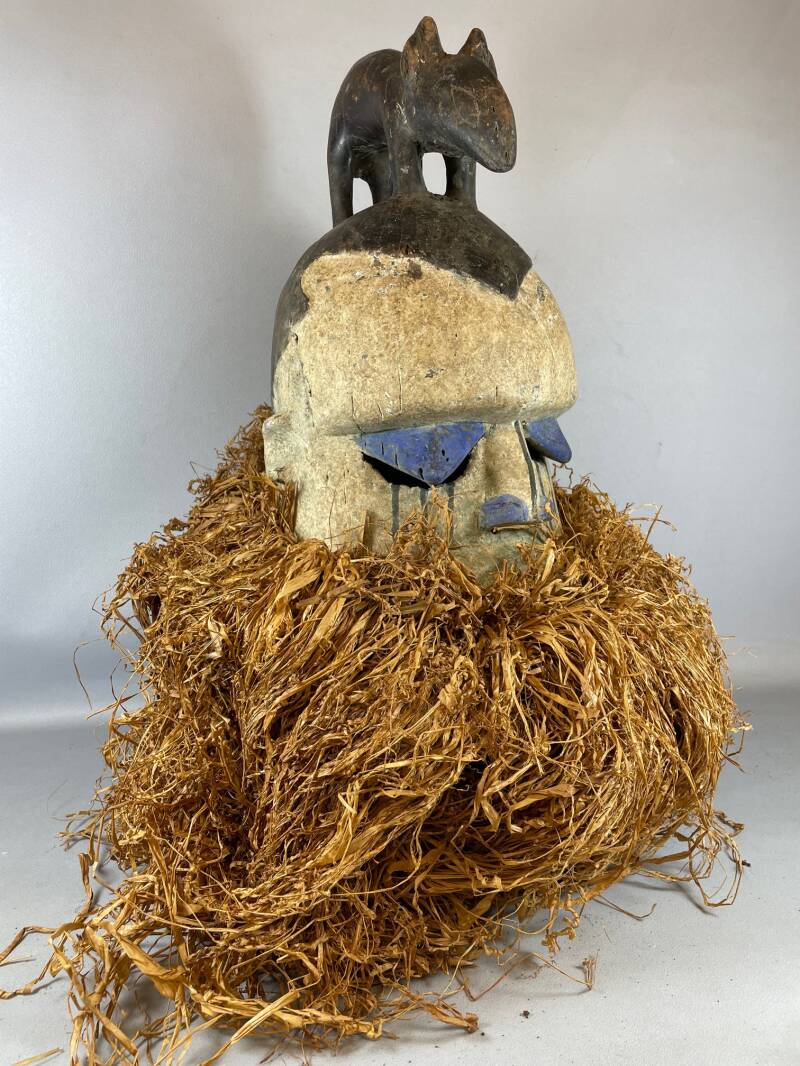 Height 38 cm without the Raffia.

In southeast DRC, the 90,000 Hemba people inhabit the right bank of the Lualaba River. This region presents vast plains surrounded by high hills and bordered by streams, rocks, and marshes. They are primarily subsistence agriculturalists whose main staples include manioc, maize, peanuts, beans and yams. These crops are supplemented by small scale hunting and fishing done mostly by the men. Some alluvial copper is panned from the river and sold to outside markets. Their social organization is founded on a system of clans that brings together several families sharing a common ancestor. They recognize a creator god Vidiye Mukulu and a supreme being ShimuGabo. The Hemba practice ancestor worship, not only to keep the memory of their great chiefs alive, but also to justify the present authority and power of the chief of the clan; the latter has absolute authority over clan members and is in charge of several ancestor figures he keeps in his own hut or in a smaller, funerary hut. The chief of the clan renders justice and his status as clan head means that he has the privilege of receiving numerous gifts. As celebrant of the ancestral cult, the chief of the clan, surrounded by the people, communicates with the ancestor, recalling his great deeds and summoning his good will. He renders justice in his own home, and collects tributes for it. Along with medicine, law, and sacrifices, the ancestral cult penetrates all social, political, and religious domains. To possess numerous effigies is a sign of nobility. Secret societies such as Bukazanzi for the men and Bukibilo for the women counterbalance the chief of the clan’s power. Diviners play an important role in society, often requiring that certain ancestors be appeased in order to establish balance in the community.

The Hemba are a matrilineal people with a sculptural tradition devoted mainly to representation of male ancestors. The sculptures of the Hemba include singiti male ancestor figures and two types of masks. Although every figure is the portrait of a specific person, the artist portrays generalized , not particular, individual traits. The figures express equilibrium, symmetry and refinement. The sculptural beauty reveals the highest moral qualities. The Hemba see the serenely closed eyes and the rounded face as reflecting the ancestor’s interior calm. A four-lobed hairdo typical for many Hemba figures, evokes the four directions of the universe and the crossroad where spirits assemble. Hands on each side of the swelling belly indicate the ancestor embracing and watching over descendants. They are called upon by the chief of the clan who is in charge of them, in a dialogue recalling the valiant deeds of the ancestor in return for his benevolence. The Hemba honor the kabeja, a Janus-shaped statuette, with a single body and two faces, male and female, on one neck. The kabeja is topped with a receptacle for magic ingredients. Each clan possesses a single kabeja, which is dangerous to handle, and which receives sacrifices intended for the spirits, a magico-religious practice that is of the essence to the family.

The first type of masks that are rare presents a symmetrical human face with a small mouth and a linear nose set between two slanted eyes. The second type is used in So’o, a semi-secret society. It represents a strange were-chimpanzee with a large, pierced, crescent-shaped mouth and a pointed nose. The function and meaning of these masks remains obscure.